Driven by the promise of learning his mother's identity, Modi the son of Thor, sets off to muspelheim to combat Surtr.

With Freya's promise of rebirth, he will undoubtedly die many times working towards his goal. But with each death he'll become stronger, until he's able to topple Surtr and tip the balance away from the edge of ragnarok.

Surtr The Edge Of Ragnarok.exe 51 MB

hello! i liked your game a lot. i subbed to your channel. but the game's necromancer(wizard) is  bit too hard. would you make it so i could stun the wizard(necromancer) so i can kill it while stunned?

Glad you enjoyed the game, and thanks for the sub. 👍

I've actually already made all of the changes I was intending to make for the game. But if I do ever go back and rework any more of the game, I'll keep an eye out for more feedback about the wizards. 👍

Just played through the game again. Overall I really love the premise and I think there's some fantastic stuff you're doing with the game. I particularly love the variety in boons and how they're all fairly distinct. I also really love that your attack has the two numbers, the main attack number and the bonus number.

There are a few things I think would add a lot to the game if you can implement them:

- Being able to dash cancel on this would I believe prevent a lot of the frustration at getting locked in a long combo. Sometimes he would go on for 3-4 different attacks in a row before I got control back, granted I am mashing the mouse usually.

- More synergies with the boons would of course be great.

Excited to see the next place this game goes!

Thanks for the feedback!

I've written down a bunch of the feedback and I'll see how much I can tackle this week.

Not sure I'll get to controller support, because I didn't plan on it from the start, even though I know that'd be great for a lot of people, I'm not sure squeezing it in would be possible without a lot of reworking. 😅

Just replayed it, the game definitely feels more fair without the pressure of playing so many games in a week, I just don't think the combat is very engaging. I've beaten Sutur (while last time I could only get to room 3) and it really boiled down to use the same tactic over and over for a half hour to finish the game.

Also I found that the i-frames were really short, I would lose 2 hearts on a single bubble. Other things I didn't quite understand : Didn't have to use the dash at all to win, why does the heavy attack no do more damage than the light attack ?, why did the combo do not add some damage to the base attack, why 2 waves of enemies per room (nothing changes between waves)? and the favor system, I did not understand that it was an upgrade per run thing at first.

I know I sound harsh, but what's the point of feedback otherwise '^^

The game as a good base, movement is good, attacks are good, I just find the whole experience too long and repetitive.

Thanks for giving it a thorough look over. Appreciate the feedback and I've got your game saved to give it another playthrough once I get time on the weekend. 👍

Really fun game that is super satisfying to play through, especially after upgrading your abilities. I didn't quite get the hang of utilizing the dash during battles but for sure the swing attack came in handy with the smaller enemies. Look forward to playing again should you keep working on this :)

I plan on giving it a single pass up tweaks based on feedback, but that'll be all. I am supposed to be working on a bigger project that I kind of forgot about because of the jam. lol

The light attack has a really thin hitbox, the heavy swing is much wider. When I go back to tweak the game based on feedback, I'll see what I can do about that. 🤔

Why doesn't dash work? it seems like a big portion of the game.

Dash wasn't working for you?

No, it just makes a black border and I can’t move.

Honestly the game is fun, but so many favors require dashing.

That's really strange, are you playing the browser version? If so, which browser are you using?

Google chrome, I suspected that is the reason, since other games have missing content in the browser version.

Thanks! I'm glad people are enjoying it. 👍

I've encountered a bug that adds my vitality. I became invincible. 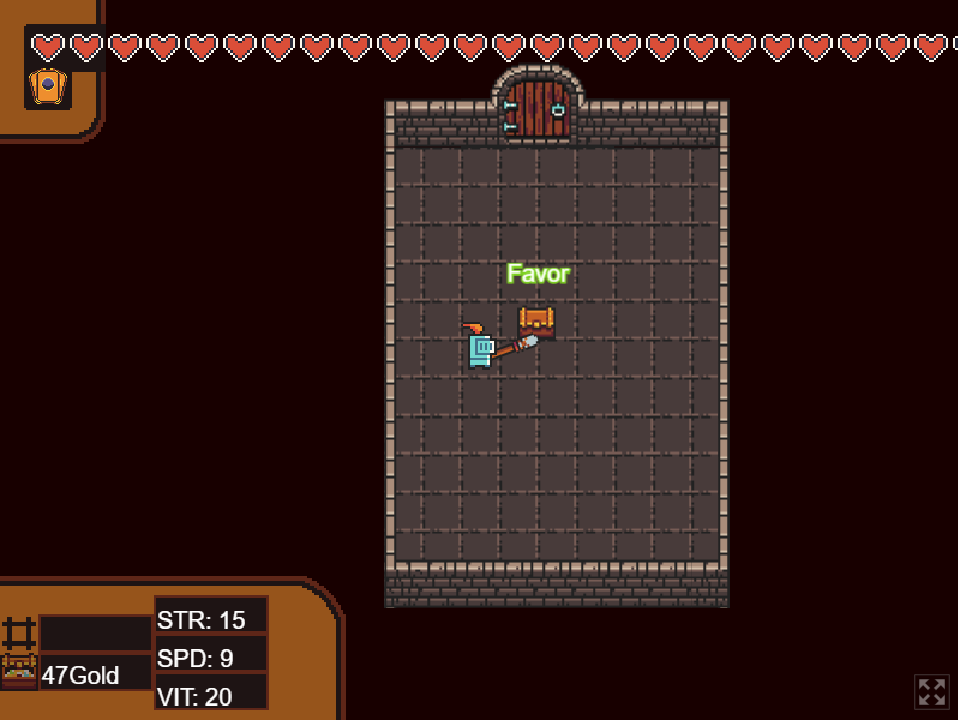 Did you get Idunns apple? If you get Vidarr's thorns favor too, you're just a walking tank. lol.

With hel's favor you can permanently stunlock all enemies, and the only enemies that can outrange you are wizards.

Ooooh, huh...... I didn't plan that, but do you think that helps or hurts the gameplay?

It makes Hel's favor a strong one to get, and means you have a new way to play because normally people are killing the wizards last, but with hel's stunlock you'd want to kill the wizard first. 🤔

I’d say somewhere in between, in the area that I think it deserves a minor nerf, my suggestion would be that you can’t dash in place with it, which would require some more movement and not be as spammy.

That's a good solution for it. 👍

This game was quite interesting. It definitely had a hades inspired aspect but I really feel that this can be comparable to dark souls. Although the combat was jank, it added to the experience and challenge to the game. At least this game allows a comeback mechanic through coins which can be used on upgrades to help in the dungeons. It is definitely a challenging game and can be quite rage inducing for some but it was really an enjoyable game. I still have yet to beat it tho! Time for the grind :D!

Thanks for sharing your playthrough!

It's awesome to get to see how people actually play a game you make. Get to see some interesting things. ;)

This was very fun. I like the idea of being able to keep your coins and slowly upgrade yourself. Makes you feel less upset for each death. Keep up the good work!

Thanks for giving it a play through!

I was "inspired" by hades, and so a lot of design decisions were made because I was following their mechanics. So I can't take full credit. lol.

Such an addictive game and a fantastic game jam entry! It was challenging, but the gameplay loop was solid (you definitely captured the feel of Hades). I managed to get to the 6th room once I'd worked up my STR and VIT. Great job!

Thanks for playing it!

Around the 2nd day I was worried that I'd bitten off more than I could chew, hades is a huge game.

But I'm pretty happy with the end result. 👍 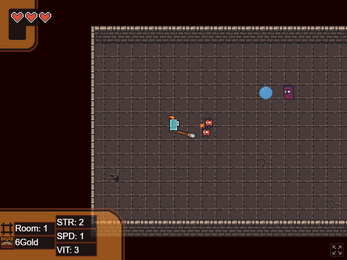 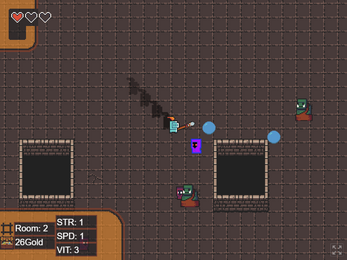 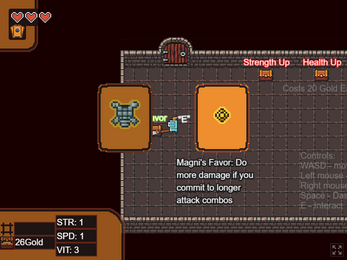